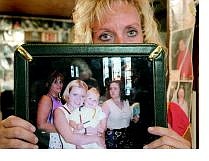 Kevin Clifford/Nevada Appeal Charlett Fortner holds a picture of her daughter Christiana Crowder before she was killed in a car accident. Crowder&#039;s funeral costs were paid by an anonymous person, which totalled more than $10,000.