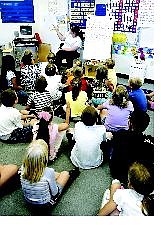 Chad Lundquist/Nevada Appeal Lisa Ansotegui, a second-grade teacher at Fremont Elementary School, reads a book to her students just after lunch on Monday.