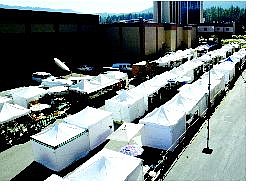 Jim Grant / Appeal News Service Arts and crafts tents line the outside of the Horizon Casino Resort in Stateline.