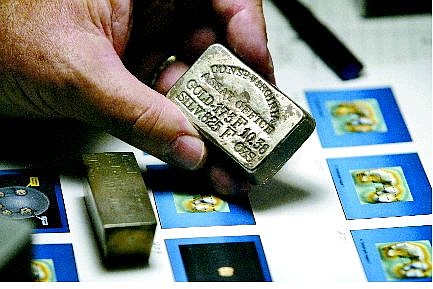 Cathleen Allison/Nevada Appeal Dave Fitch holds a silver ingot that was mined from the Consolidated-Virginia mine in Virginia City around 1890-1900. The smaller ingot, left, is dated 1869 from Treasure Hill, in White Pine County. The paperwork below the ingots shows the type of fingerprints scientists are now using to map the components of the ingots. BELOW: Fitch and Fred Holabird work with gold and silver ingots at Fred&#039;s home in South Reno July 15.