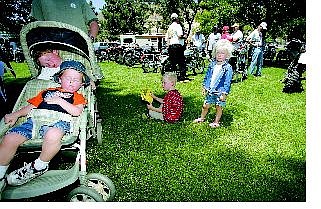 Brad Horn/Nevada Appeal Graeme Eckery, 2, in front of stroller, and his twin brother, Brock, of Carson City, take a nap at Fuji Park while Colin Ellsworth, 5, and his sister Lauren, 3, of Vacaville, Calif., look at Vintage motorcycles with their father during the 10th annual British-European Vintage Motorcycle Show and Swap on Saturday.