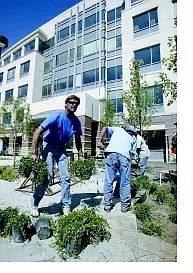 Cathleen Allison/Nevada Appeal Jason Hyatt of Peri Landscape Construction and Materials works on the landscaping in front of the state&#039;s new Department of Conservation and Natural Resources building at Stewart and Little streets Tuesday afternoon.