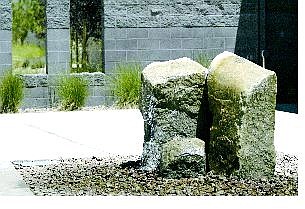 Cathleen Allison/Nevada Appeal Western Nevada Community College will dedicate a new fountain Friday in a ceremony to honor emergency personnel who fought the Waterfall fire. The fountain was donated by Dustin Rand of Stone Effects in Reno.