After 20 years of silence, brain-damaged woman begins talking and remembering 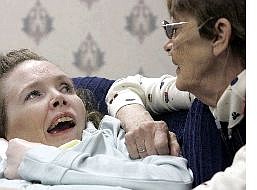 Larry W. Smith/Associated Press Sarah Scantlin, left, looks up at her mother Betsy Scantlin at Golden Plains Health Care Center in Hutchinson, Kan., Saturday. Twenty years after being hit by a drunken driver Sarah has begun to regain her memory and form words.