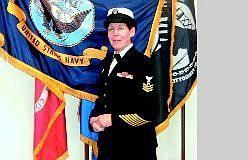 Mary Jean Kelso/Nevada Appeal News Service Pam Doerr, Fernley resident and service officer for American Legion Post 37, made the Naval Reserves her lifetime career before retiring and becoming active in the community. Doerr presides at many funeral services and ceremonies for veterans and civilians.