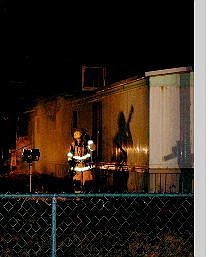 Kelli Du Fresne/Nevada Appeal A Carson City firefighter exits a home on Brown Street that caught fire Saturday night. The home was completely destroyed but resulted in no injuries.