Seniors get together for casual 'jam sessions' 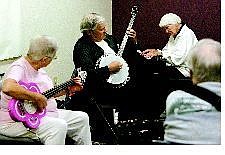 Cathleen Allison/Nevada Appeal A group of music enthusiasts get together to make music at the Carson City Senior Citizen Center on Tuesday. From left, Alice Gregor on bass, Richard Taylor on banjo, Reba Tawlks on keyboard and Bob Chambers on guitar.