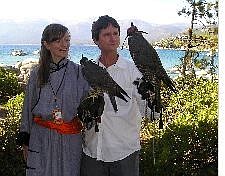 Filmmakers Joseph Spaid and sound designer Anna Halldorsdotti pause with hawks since no eagles were available at the press conference for the Reno/Tahoe International Film Festival. Nevada Appeal