Luke the K9 cop back in the saddle 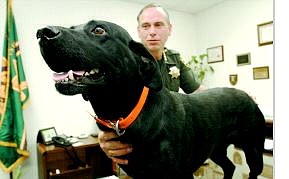 Nevada Appeal file photo Carson City&#039;s former K9 cop Luke has found a new beat at the Nevada State Prison. Luke will be sniffing for drugs inside the prison and on weekends during visitation. He&#039;s pictured here in October with Sheriff Kenny Furlong after the city discontinued its K9 program.