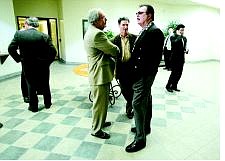 From center right, Max Baer Jr., his partner Roger Camras and attorney Preston Howard talk in the lobby of the Nevada Gaming Control Board before a hearing Wednesday in Carson City. Brad Horn/Nevada Appeal