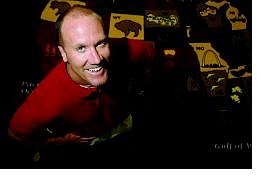 Kevin Clifford/Nevada Appeal Lee Conley, new principal of Seeliger Elementary School, poses on a U.S. map rug in the school library Thursday. He is leaving Empire Elementary School behind, where he was vice-principal for three years.