Learning to say 'no': Fifth-graders graduate from sheriff's program 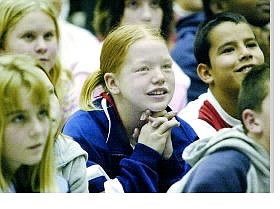 Ali Fleming, 11, waits anxiously for the DARE essay winner results during Monday morning&#039;s graduation ceremony at Fremont Elementary School. The group of more than 100 fifth-graders was the first class to graduate since the drug-resistance program was reinstated.