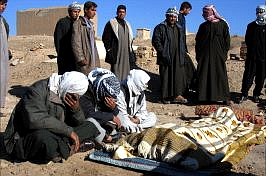 Associated Press Relatives of a policeman killed in an insurgent attack grieve during his funeral in Tikrit, Iraq, Tuesday. Nineteen policemen died when gunmen attacked the station Tuesday.