More than just a hostelry, it was a beacon before fire destroyed it 90 years ago today 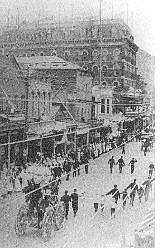 Main Street, C Street, Virginia City, during what looks like a Fourth of July Parade. The International Hotel looms in the background. The first International was a joint venture by Isaac Bateman and Andrew Paul and was a single story built of rough-hewn timbers cut from Six Mile Canyon.