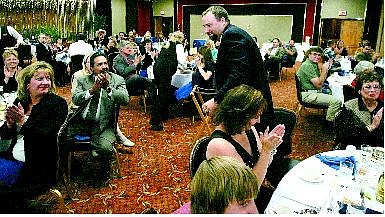 BRAD HORN/Nevada Appeal Jeffrey Smeath walks to the podium after being announced as the 2004-2005 Carson City Chamber of Commerce Chairman of the Board during the chamber&#039;s annual installation dinner at the Carson Nugget on Friday.