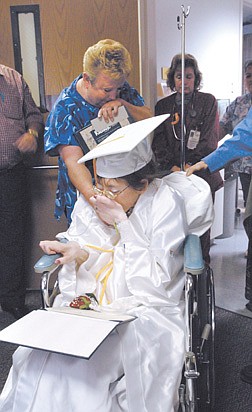 WNCC Graduate Caren Miller Kisses the hand of her nurse (who preferred to be called) Fee Dee during a special graduation ceremony in the Lobby of the ICU unit at Carson-Tahoe Hospital Tuesday afternoon. Miller inspired those around her by earning her business degree from WNCC while simaltaneously battling life-threatening disease. photo by Rick Gunn