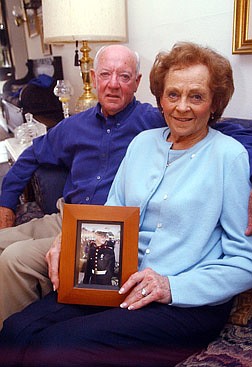 Kenneth Charipilloz Sr., left, and Alice Charipilloz hold a picture of their grandson, Sgt. Graham Collins, who has been in the Marine Corps for eight years and was deployed to the Persian Gulf two weeks ago. Collins is at least three quarters of the way to Baghdad with his unit and continues to advance on the city. Photo by Brian Corley