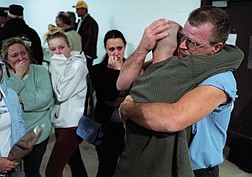 eJoseph Smith, right, hugs his son Spc. Adam Smith before he deployed along with about 55 others from the Nevada Army National Guard&#039;s 777th Engineer Utilities Team Company early Tuesday, March 18, 2003 in Henderson, Nev. Behind them are friends and family. (AP Photo/Las Vegas Review-Journal, John Locher)