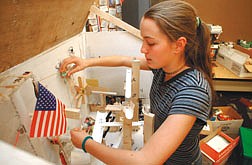 Loretta Williams 13, works on her Mission Possible project for the Science Olympiad competition. The project is one of 23 events students from Eagle Valley Middle School competed in to win the state competition. They are preparing for nationals May 10.