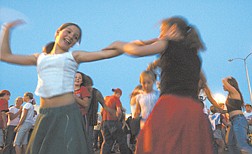 Veronica Jenks, 11, of South Lake Tahoe, from left, and Lauralee Bell, 13, of Gardnerville, dance Friday evening in the parking lot of the Carson Mall.