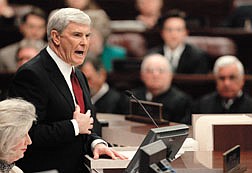 Nevada Gov. Kenny Guinn delivers his State of the State Address at the Legislative Building in Carson City, Nev., on Monday night, Jan. 20, 2003. Guinn is calling for nearly $1 billion in new taxes over the next two years. (AP Photo/Nevada Appeal, Cathleen Allison)