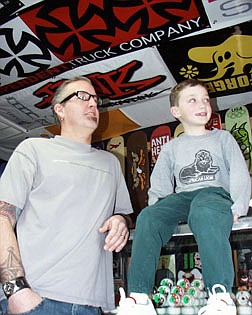 Eric Robie, owner of Out of Bounds, with his son Jacob, 7, is leading an effort to build a new skatepark in Carson. Robie plans to ask the Parks and Recreation Commission tonight for approval to build the park at Centennial Park.