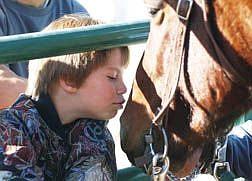 Sephanie Jones, 9, leans in to give Candlebox a kiss. Candlebox was one of eight Mustangs trained and put up for adoption Saturday at Warm Springs Correctional Center. Jones hoped to take Candlebox home with her. Photo by Brian Corley