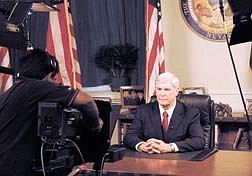 Nevada Governor Kenny Guinn prepares to address Nevadans on the State of the Economy from his office at the Capitol in Carson City Nevada on Thursday September 28th, 2001. (AP Photo /Rick Gunn, Nevada Appeal)