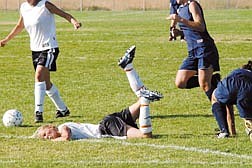 Amber Gwinn, of DHS, takes a fall after colliding with Allison Kop, of CHS, right, during Tuesday&#039;s game at Douglas. photo by Rick Gunn