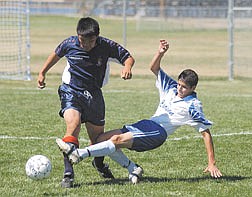 Carlos Hernandez takes the ball away from a Reno High School defender late in the first half. Carson came from behind to win 3-2. Photo by Brian Corley