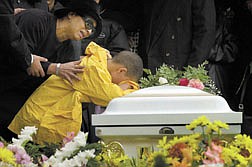 Anna Jager holds her grandson, 8-year-old Kevin Villa, as he cries over his mother&#039;s casket during her funeral at Mt. Hope Cemetery in Yonkers, N.Y., Friday, Sept. 14, 2001. Yamel Jager Merino was an EMT with MetroCare and was killed at the World Trade Center while trying to rescue others. (AP Photo/Stephen Schmitt, The Journal News) NO SALES, NO MAGAZINES, MANDATORY CREDIT