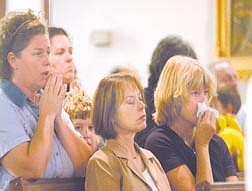 Terri Domitrovich, left, Marilee Swirczek and Catherine Boedenauer mourn the loss of lives from the terrorist attacks at a noon mass at St. Terressa&#039;s. Photo by Brian Corley