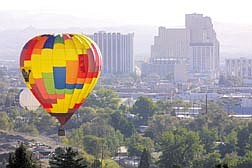 The Great Reno Balloon Race celebrates it&#039;s 20th anniversary this year. The event kicked off Thursday morning at Rancho San Rafael Park in Reno. Racing will continue through Sunday and events are open to the public.