Local guys take barbecue to the next level. 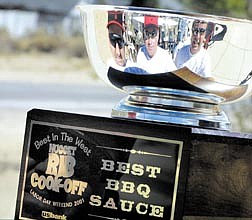 From left, John Loomis, of Carson City, and Carson City BBQ owners, Duane Felker and Phil Hyatt look at their trophy won for best sauce at the Best in the West Nugget Rib Cookoff in Sparks. The Carson team also won the People&#039;s Choice award.