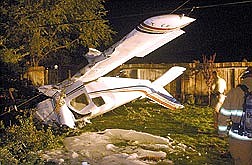 Brian CorleyThis plane came to rest in a back yard on Apollo Street in Carson City on Saturday night. Three people were hurt.