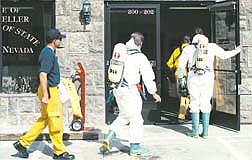 Carson City firefighters enter the Secretary of State&#039;s Musser Street office Tuesday to disinfect the office after an anthrax scare. A worker there found a powdery substance in a letter. Photo by Geoff Dornan