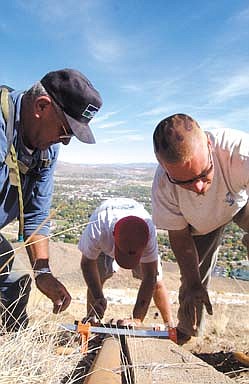 Robert Sargent, left, Brent Buscay, and Jason Gardner construct part of a 60 foot support beam that a giant American flag will be attached to. The flag which was supposed to be completed by Sunday may not get completed until as late as October 17th. Photo by Brian Corley