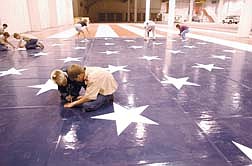 Left to right, Glenn Rowley, 12, and Mark Hahne 13 were two 12 boy scouts from Carson City Troop 44 mark a 120 x 67 foot flag for the 2400 grommets which will help hold it together. The flag was designe Josh Buscay and crew and will be draped atop C-Hill. photo by Rick Gunn