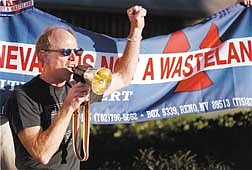 Bob Fulkerson, of the Progressive Leadership Alliance, stands in front of a &quot;Nevada Is Not A Wasteland&quot; banner as he leads an anti-nuclear dump rally in Reno, Nev. on Thursday, Oct. 4, 2001. Fulkerson and others staged the protest against a proposed nuclear dump site at Yucca Mountain during a public hearing on the project. (AP Photo/Debra Reid)