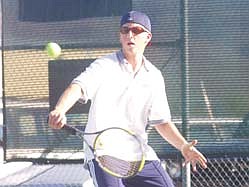 Baron Brooks tries to return the ball in his doubles match against South Lake Tahoe High School. Brooks and his partner Tim Suchsland lost the match. Photo by Brian Corley