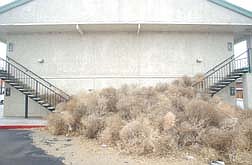 Tumble weeds piled up to the second story of the back of the Quality Inn Wednesday morning. Tuesday night&#039;s storm blew also blew over fences around the area.