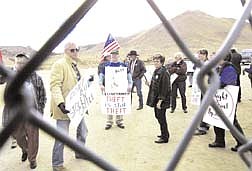 About 50 demonstrators were kept at bay amid tight security Tuesday, as U.S. Bureau of Land Management officials auctioned off cattle confiscated in a dispute over grazing fees. The auction, held in Palomino Valley, north of Reno, Nev., resulted in the sale of the 62 head of cattle for $13,000.