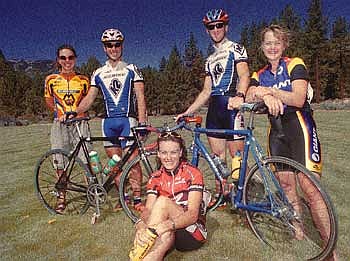 Brian Corley photoThis group of mountain bikers from New Zealand wrapped up a month-long stay in the Carson Valley area Sunday by competing in the Diamond Valley Road Race, including (from the left) Paul Bishop, Rebecca Rose (seated), Dean Hill and Lisa Savage.