Trio walks away from crash 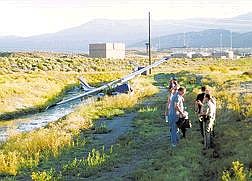 photo by Karl HoreisPilot Alfred Speckman, in gray shirt with brief case, talks with officers after he crash landed an early 1970&#039;s model 172 Cessna near the Waste Water Treatment Plant on North Edmonds Drive and East Fifth Street. Speckman and his two passengers were transported to Reno for treatment by a private party. No one was seriously hurt in the crash. The plane lost power near the airport and clipped a power line which started a small brush fire, which was extinguished.