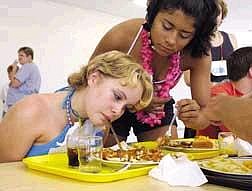 Nevada Appeal PhotoDezaray Pluff, 16, at left, experiences what it&#039;s like to eat a meal without the use of her arms with help from Maria Urbina at Camp Anytown on Wednesday. Both girls are Carson High School students. Students at the camp simulated different disabilities to learn more about tolerance and adversity. Urbina was `unable&#039; to talk.