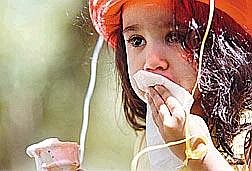 Rick GunnTanisha Demo, 3, of Gardnerville wipes the ice cream from her face at the Robert&#039;s House Ice Cream Social on Sunday afternoon. The benefit event helped raise funds for the historical house.