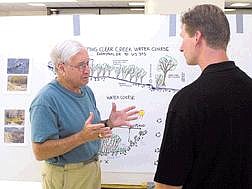 Cathleen AllisonTom Hughes of Carson, left talks with City Senior Engineer Robb Fellows on Monday during an open house on the future of Fuji Park. The open house continues today and tomorrow.