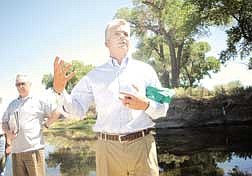 Brian Corley photo.Senator John Ensign talks about conservation along the Carson River during his tour of rural Nevada as Bob Milz looks on. About 75 showed up to voice their concerns and hear Ensign.