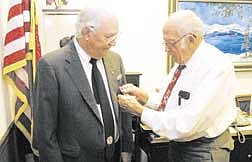 Photo by Cathleen AllisonNevada Sen. Lawrence Jacobsen, R-Minden, right, pins the Bronze Star onto Don Howser on Thursday afternoon at the Legislature. Howser received his second Bronze Star for leadership in the Korean War. Howser was honorably discharged from the Army in 1954.