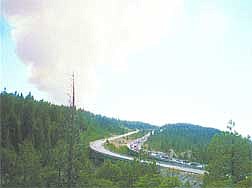 Nik Dirga/Sierra SunA plume of smoke towered over Interstate 80 Sunday afternoon about 4 p.m. in the early hours of the Gap Fire.